A forest not a tree

PraxisCORE has its own Forest-of-Actors architecture for distributed and concurrent programming. The strict adherence to this allows for easy working with multiple pipelines. It provides the ability to safely background load resources, process data, or replace running code without interfering with real-time processing. And it allows for projects to transparently run across multiple processes (for better performance) and/or multiple devices.

Individual components exist within a tree, which can be multiple levels deep. All components have an address, which follows a familiar slash-separated syntax (eg. /data/filelistener). The first level of this tree is a special type of component called a Root. Roots generally provide the overall context and scheduling for their child components.

There are currently 7 types of root available within a standard PraxisLIVE install - a generic (data) root, and specialist roots for video (OpenGL visualization), audio (DSP), GUI, OSC, MIDI and TinkerForge hardware. While you might commonly have one of each type you require, it is possible to have as many roots of as many types as your system(s) can handle.

All roots exist within a Root Hub. The root hub is a container for roots, but it is not itself a component. All roots are sand-boxed from each other – there is no way for any root or component within it to directly access another root or its components. Instead, the hub acts as a router to pass messages between different roots, local or remote. 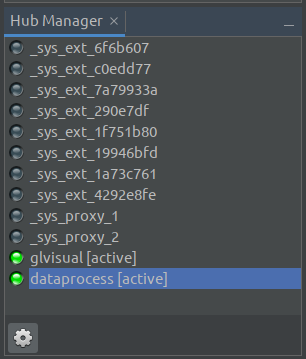 The Hub Manager within PraxisLIVE gives you a visual representation of the root hub. You will notice that there are 2 user roots running, and that the button is toggled to also show you the system roots - all of the system code is equally sand-boxed and confined to using the message-passing system.

Components within PraxisCORE have two ways of communicating – Ports and Controls. Ports are used for synchronous communication with sibling components (share the same parent). When you connect components by drawing lines in the PraxisLIVE graph editor, you are connecting ports together. They are a lightweight mechanism for sharing control data, OpenGL textures, audio buffers, etc. Ports also have an address (eg. /video/capture!out).

Controls are the basis of PraxisLIVE’s message-passing system. They receive, react and respond to messages usually coming from a component within another root. All communication without exception between components in different roots ends with a control receiving a message. Controls have an address consisting of their component address and ID (eg. /video/capture.play) – the dot syntax is a deliberate parallel with method calls. 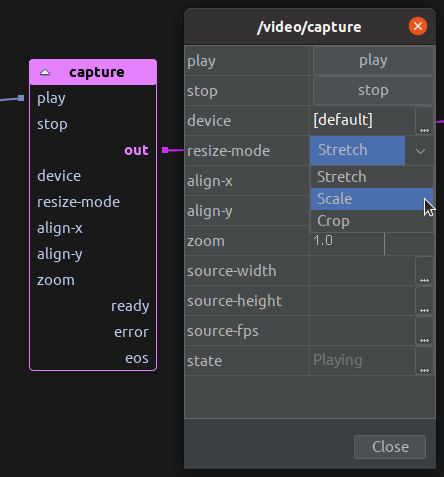 Above you can see an example of a video:capture component in the editor. Ports can be seen on the graph component and controls within the component editor window – note that many controls will have a corresponding port.

When you manipulate values within the dialog, you are sending messages to controls on the component. There are three different types of controls – actions, properties and functions. Actions (buttons) and properties can be seen in the table. Functions are not fully reflected within the editor, and are primarily used internally.

The ready and error output ports reflect the fact that some things may happen asynchronously, or may fail. A robust project will normally use these signals to trigger suitable actions in either case.

Additional information on the architecture of PraxisCORE can read in the blog posts A Forest of Actors and Just-in-Time Programming.