The PraxisCORE architecture is driven by its own simple scripting language - Praxis Command Language (Pcl). However, using PraxisLIVE you don't need to know this as the project system allows you to build projects graphically.

PraxisLIVE projects are folders. The configuration of each root in your project (video patch, audio patch, control panel, etc.) is stored in a separate file. These files have the .pxr file extension.

The scripts and other elements that make up a PraxisLIVE project are divided into Build Level elements and Run Level elements. It is important to remember that everything is edited live, so only components that are actually installed in the hub can be edited. For this reason, you can build a project to enable editing without needing to run it. As you develop a project, the system tracks which elements have and haven't been executed, so that you can always build and/or run a project at any time.

The main project folder also contains a resources folder. It is recommended that you store all media required by your project in the resources folder, or a sub-folder of it. This allows for projects to be completely self contained and makes distributing them easier. The pop-up menu on resource folders provides the ability to import files or open in the system file browser.

The Projects tab gives you the tools for creating, opening and managing projects. Projects are shown in a file view which shows you all the user-editable files. 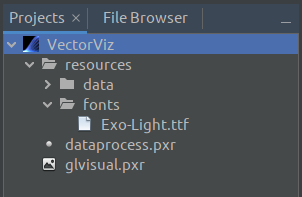 Here you can see one of the example projects opened within the projects tab, with all folders expanded. Note the location of .pxr files which define different roots, as well as various resource files.

To run a project, select it and use the buttons on the toolbar, or use the pop-up menu on the main project folder.

To stop and clean a running project, also use the toolbar button or pop-up menu. You will be given the option to save any changes.

The .pxr files will open for editing automatically when a project is built or run. You can also open these files manually.

You can create a new .pxr file, such as an audio or video patch, from the project's pop-up menu. Selecting one of these options will open a wizard which will allow you to provide the root ID, which will also be used as the name of the file. If the project isn't built, you will be given the option to build it so that the file can be edited. 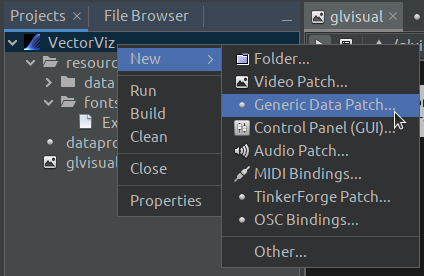 Inside the project properties you will find support for configuring the hub, including control of which roots run in local external processes or on a remote machine. The same settings will apply when running the project within the IDE, and when running from the command line or standalone.

Proxies must have unique names (eg. video, audio) although these are only used for informational purposes. The id and type fields use glob patterns, including * and | to match against root id and type, checked in the order they're specified. Host and port can be local or remote - a port setting of auto can be only used where a child process is being launched.

An exec section, if specified, will auto-launch another process when required (unlike earlier versions of PraxisLIVE, the child process support in PraxisCORE is lazy). A command of default means to create a new version of the existing process, with specified java-options. Other commands and argument passing will be supported in a future update.

The file server can be enabled if using remote processes to serve resources to them. Note that there is no authentication involved, so be careful with network security.

You can launch a PraxisCORE process on another machine and connect to it over the network from the IDE. To launch the child use the command line launcher -

Assuming the above process is running on a machine at 192.168.0.42 the IDE set the project configuration to this and build the project as normal -